Freedom: The Story of My Second Life – by Malika Oufkir 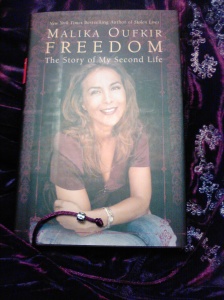 This book is one of the cherished volumes of my personal collection that just can’t seem to make it into a “give-away” pile to allow room for new reads on the shelf. Each time I say that I’ve read enough that I ought to be able to detach it from my core staples, it keeps coming back and taking its place among the rightly-deserved designated “keepers”.

Why this should be so is due to Ms. Oufkir’s beautiful Middle-Eastern phrasing and mindset. No-one can write with the allegory and turn-of-speech better than a son or daughter of the Levant (including the northern reaches of Africa). Think number one books, such as the Bible, or number one authors or poets, such as Khaled Hosseini or Khalil Gibran, respectively, which bring to mind examples for the simplicity of sentence regaling the beauty of a song.

Malika’s prose and outlook are remarkable, given the harsh treatment received throughout much of her life. She was the favored playmate in childhood of the King’s daughter. Later on, her father would be executed and she and her siblings and mother imprisoned for twenty years as collective punishment for the assassination attempt on the King in a coup d’etat allegedly involving Malika’s father. Their subsequent escape, recapture and final harrowing push to freedom are relayed in a compelling saga woven as beautifully as an embroidered wedding dress.

Her first book, Stolen Lives, was an international best-seller and relates her years during captivity. It doesn’t matter which book is read first; I almost prefer having read the sequel with which to gird oneself for the harshness of the first.

This post is dedicated to freedom and to the brave souls who fight to find it.

Comments Off on Freedom: The Story of My Second Life – by Malika Oufkir