Randy’s Reviews: The Day You Were Born: A Journey to Wholeness through Astrology and Numerology – by Linda Joyce 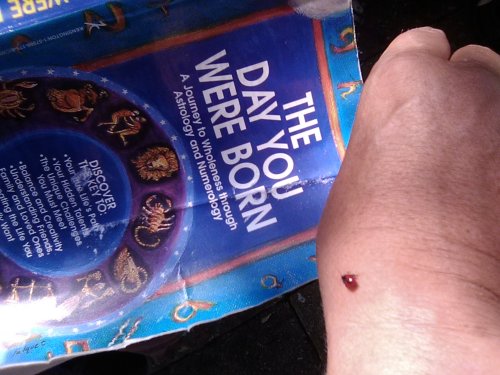 Randy’s Reviews: The Day You Were Born: A Journey to Wholeness through Astrology and Numerology – by Linda Joyce (Randyjw; June 16, 2019)

This book applies the sun signs of the zodiac, in a formula beginning in Aries and ending in Pisces, with a numerological factoring for the variance, and combines it with some metaphysically-specific best-practice recommendations to supposedly inform a person on the manners whereupon this application might be achieved.

Is it proper for me to side with or promote an astrological/numerological work? Not quite. Evidence for this, in Judaism, would point to the disaster of King Saul and his consultations with Hulda, who may or may not have been the same (I just don’t know) as the externally written-about Greek Oracle of Delphi. King Saul eventually fell prey to a never-ending wrestle between inner peace and an aroused spirit of paranoia and jealousy toward his eventual successor, David, the only one, paradoxically, who could calm Saul’s troubled spirit with the notes he played on his kinnor.

Yet, there exists further depth in the Judaic expression and realms of revelations intrinsic in the holiness of the Hebrew script (it is G-d’s word, after all); the corresponding numerical equivalency of the tandem Gematria; Kabbalah; and, really, actually, all things.

I can argue under Judaism, or Jewish perspective, for a combination of the essentiality of man’s existence on the earthly plane, combined with the striving toward the spiritual plane. G-d’s Laws (the Torah) are set before us with the imperative to choose life; that ye may live. We are told that doing so is not too difficult for us. We see that the 613 commandments include both the positive and the negative. We see that they include both the earthly (between man and man), and the heavenly (between man and G-d) — the stronger emphasis, surprisingly, being expounded as those between men. Disaster befalls us each and every time we go astray the Laws, which is a deviation from the spiritual. And Hillel sums up the whole of Torah as the essence that one should not do what is hateful unto another, stressing the earthly, inter-relationary aspects of man.

According to Linda Joyce, the author of the titled book in review, life should be balanced between the worldly aspects of the physical, such as the body and things of the earth, which is known as Ego, and the world of Spirit – – the heavenly realm — in order for the soul to receive its lessons as it proceeds through life and corresponding zodiac sun signs to grow in a balanced manner.

Linda Joyce has formed a merger of the practices of numerology and astrology to reveal an appreciable insight into human nature, combined with a gift for anecdotal and biographical supporting stories. What I can say is that, for everything that she presents, she does so to full confirmation of a certain perspective.

In a way, I always thought it was most imperative to nurture the qualities which would be so-considered the characteristics of a “higher calling,” tending to feel that one should aspire to lift one’s self above a baser nature. There’s nothing wrong with self-improvement, so I don’t find that, as an expression, to do so is as hypocritical an endeavor as the transverse, where the thought might be that, perhaps, one can only express their authentic selves via the masks of solely their present, fixed immutability. I think both give themselves a viewpoint weighted to the specifics of each varied individual: an optimistic outlook or a realistic outlook; but valid on either hand, regardless. It just matters which works better for each person.

Much like magic did this book appear on a shelf, at a time of deep, personal loss and internal struggle; although, unlike magic, I believe in G-d, and I believe in the basic goodness of man. The Biblical Jacob and his personal struggle teaches us about life, love, hardship and pain. But the message imparted is that we can prevail.

This excerpt, delineating Ego and Spirit in its last perfected self through Pisces, is seen, then, thus:

The search for your true origin, the haunting memory of happier days, innocence and youth — this is your memory of Eden and paradise. Darwin shocked and divided the world when he declared that men and apes had a common ancestor. His findings challenged the biblical origin story. The truth is that both origin stories are correct. We come from both heaven and earth. Heaven provides our mythical and symbolic origin. Evolution is what happens to us on earth — we evolve and grow and transform. The two are not in conflict (pg. 343).

Feelings of separation and loss, either because your path leads you elsewhere or someone else’s path has come to an end, is symbolic of the relationship between Ego and Spirit. Pisces is the end of the journey, and these two antagonists have traveled together through sunny days and terrible storms. They know each other in any disguise. They can recognize each other in a crowd, in the role of pauper or king, thief or saint. Together they have played all the parts, challenged each other’s goals and ideals, fought for and against each other’s dreams, shared each other’s joys and sorrows, triumphs and failures. Their commitment to the journey has bonded them through shared experiences, and now their differences seem unimportant and small. Theirs is a true relationship, one tested and sure, one based on earned respect. Now, when they have put aside their differences and learned how to play, it’s time to part. Love has awakened through the impending separation. Ego is old and must face death. Spirit is young. Having been reborn to a new strength, she can now defend herself and move forward, taking Ego’s memory into her heart and soul. Along the path he has protected her, allowing her to do her work. His devious ways and masterful disguises have honed her ability to see and discriminate. He has been her warrior, fighting her dragons; her enemy vying for position and power; her lover, embracing her with desire and will, trying to control her every breath. He has put her on a pedestal and he has abandoned her for fruitless dreams. But through it all they have remained together. Forgiveness came in Aquarius and the true meaning of love will come with separation. For without loss one does not know what one once had. They are soul mates and the song they sing has finally become one. Ego will surrender into the soul of the Spirit, ending their separation forever. Their love defies death because they are children of heaven and earth, who through their magical relationship have been able to bring one person closer to his or her true nature, to enlightenment, and to God.

… what they are learning is to love and go on, embodying that love within their soul, knowing that their physical presence is not needed for it to be real (pp. 373-374).

Comments Off on Randy’s Reviews: The Day You Were Born: A Journey to Wholeness through Astrology and Numerology – by Linda Joyce