“Zeitim” is Hebrew for the English word “olives”. One most associates the old olive trees in Israel with the green variety, some trees living for thousands of years back to the times when all three monotheistic faiths could witness their growth, both the trees and their religions, through the Jewish lens of Jerusalem and Judah/Israel. Both the trees and the Jews were there to witness these births and the impacts they have had on humanity — and, not to mention, on the Jews and the trees, themselves.

The Jewish people, and its faith, believe that the Messiah will arrive to usher in the G-dly reign by walking through the double gates in the city walls of the Old City of Jerusalem, opposite Har HaZeitim, or, as it’s English name is called, “The Mount of Olives”. This physical site is the rising mountain located next to and over-looking the Beit HaMikdash, the Jewish Temple, which stood upon the Mount opposite, which now is home to the famous gold-domed and silver-roofed house of Islamic prayers.

Because we believe that the Messiah will arrive  at that spot, it has behooved us to build our graves there, so that we can be closest to meet the Messiah, at that time. In life and in death, we believe in G-d. It is for this reason that Har HaZeitim, the Jewish cemetery, is situated directly across from the expected arrival spot. Har HaZeitim is the oldest known cemetery in the world. It’s gravestones are graves of stone.

Stone has a lasting permanence; it is what G-d has chosen in creating the bedrock and mantle of the crusts of the earth, and of its many interesting geological formations in the composition of the mountains. A small rock or pebble is placed atop the gravemarker upon visiting the site of a Jewish grave location. The tectonic plates which are pushing against one another as they slowly contort the landscape might be riding on the waters which separate firmament from firmament, and from the waters above of the firmaments above. Careful reading of the Bible would show this as a possible meaning to the wonders of our worlds — things we only don’t discover until much later, if at all.

The love of the Jewish people for the words of G-d, and their belief that the land He delivered them and the place that He requested as His abode, within the Beit HaMikdash (Jewish Temple) upon its mount, resting on the bedrock of Jerusalem, in the land of Judah/Zion/Israel/etc., has prompted the correlation by the derivative monotheistic faiths to develop tandem, or occasionally, replacement-based theological viewpoints, sometimes leading to major movements.

These three evidentiary details should be clear proof that the Jewish claim, not only to the site of the Temple Mount, but to the land of Israel, is legitimate: the Jewish cemetery built on Har HaZeitim to greet the Messiah shows that the Jews cherish and respect the Holiness which G-d accorded it. The cemetery is the oldest in the world, continuing to serve its intended function as a Jewish cemetery. This precedes any possible other claims, being an original, archaeological physical proof, as well as a faith-based demonstration of the Jewish spiritual reality and attention to its fulfillment. The retaining wall to hold the Temple Mount in place has been known as the “Wailing Wall” to successive generations of faithful believers (the “Western Wall” to Jewish sources, translated from the Hebrew “Kotel HaMa’ariv”) who have undertaken specific pilgrimages of faith to visit there throughout the centuries. It is known in extant extraneous sources of written literature attesting to these travels to the revered site in Jewish history and its lore from a broad range of faiths and people throughout history. These documents are being ignored in ceding the site to Arabs, but should not be. The site was built to support a massive structure, requiring the placement, right down to the very bedrock, of 144-ton stones to support the distribution of weight across its surface and to raise it upon its pedestal. There is nothing built below bedrock — no other culture found below this level. It’s walls rise up through the striations of following levels of human existence, but it remains rooted to the earth at its very foundation level. Knowing its importance in relation to the Jews’ perceived relationship with G-d, other faiths built there to receive the glory, as well. It is the reason for the abundance of structures of all faiths, throughout the centuries, enjoining that they receive their share of spiritual accord, too. Some, such as the Arabs, meant to take all the glory away from the Jews; during the time of their actual reign here, too, they made certain to stop the Messiah’s arrival, which would bring the Jews back to their glory, by blocking-up the entry-gates of the walls to the city through which He is supposed to enter. The difference in workmanship, and that this bricked-up addition to already existing entrances to a much older structure, should be obviously apparent (– but, it’s ignored).

The wood of the olive tree has had major Biblical significance, as well. Because of the olive tree’s significance, mentioned throughout testaments of varied faiths, it and its wood, used in the Bible, are extremely revered and imputed with hallowed significance in the industry built up around its usage for keepsakes. Carvings from its wood are especially helpful as a means of employment, particularly among the Arabs who carve and sell such figurines from its wood to the burgeoning Christian pilgrimage visitors, as well as casual tourists, visiting Israel’s sites. Olives are among the species of Israel listed in the Bible. Its oil and the millstones and vats used for its pressing are found in ancient archaeological excavations around Israel.

My first encounter with a green olive occurred many, many years ago. Our family was the home where Thanksgiving took place, and my cousin coaxed me to try one. Perhaps it was profaning the sanctity of its species in a secular observance which embittered its taste in my mouth, and my reaction was rather exaggerated and it had to go; and go quickly it did, in a rather irrational manner.

My next attempt to try one came directly from a tree in Israel at the site called Gan HaShlosha (or, “Garden of the Three”), a paradaisical oasis of natural hot springs, date palms, olive trees and unbelievable beauty in the sandy desert-like conditions mostly surrounding it. A pool containing the visible portions of this spring has been built to enhance its comforts, and it is definitely a must-see place to visit. It also has another name called Sachne Oasis. I tried the bitter offering of the olive straight from the tree before being brined or preserved, and again, had the same reaction; I wasn’t alone in this — the entire group did, as well. But that was, again, a less commital exertion, on my part, to comply reasonably with facets of our faith’s practices and observances — So, no-go.

Then, when I had the right intent, or at least the best of intents on my part to commit further to Israel, the olive became an agreeable and loved and adored foodstuff from G-d that I crave in my diet and which provides me so much sustenance. Thank you, L-rd! And this came about in the most secular manner, by the way. I had visited a mall and there found a Kosher Domino’s pizzeria inside! Fancy that!? It was sortof expensive and I was going to have none of that, but somehow the pizzamaker had convinced me I needed to try it, and that was that. I don’t recall exactly, but I think that we were also debating the merits of an Israeli Jewish staple, at least in terms of pizza toppings, as pepperoni, sausage and bacon do not aspire to the list. It wss an “Ode to the Green Olive” (my title theme eventually to continue in the future, so I claim it as mine — no grabsies). Past occurences notwithstanding, there it was — now on my plate before me. He was right. I don’t recall whether I agreed or whether I received it by “accident”; but, perhaps, maybe there are never any real “accidents” in life. Perhaps this represents an ascension, an accedance, to the realm of the metaphorically-relevant existence operating in G-d’s spiritual realm.

This dish can be eaten as a side accompaniment, as a meal in itself, or used raw or cooked in entrees and hors d’oeuvres, like a tapenade. It’s flavors are spicy. Mixed with sweet apple, as I did here, it became a melding of perfection — peppery bite with underlying temperedness of sweetness. It reminds me of the Yiddish embodiment of Jewish expression. 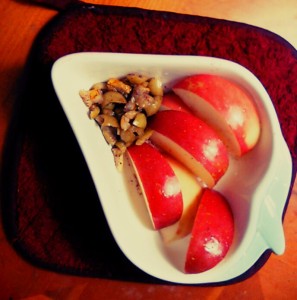 Lemon rind (washed, ripe, edible — can be substituted with other edible citrus peels or the zest from non-edible rinds; other substitutes, and your favorites, might work, as well), cut fairly small

Sugar (any kind; I used white, granular; to be the base for the sweet, syrupy slurry that will be infused with the aroma of the add-in; other substitutes, like agave nectar or honey, etc. can be utilized additional to, or in place of, the sugar)

Apples, sliced (optional; never-ending adds: on toast; over rice; as a stock-starter to jump off on other dishes, etc… Also: on lettuce, as well as on lettuce and with a garlic-pasta all-together)

At least 1/2-day to 1-day in advance (it’s better this way, but if you must proceed otherwise, don’t let that stop you), prepare the slurry by zesting the peel (if hard and inedible) or cutting the edible, soft, ripe, washed rinds of citrus or other matter you are turning to a liquid-derived, flavor-infused slurry into a container and coat with sweetener, several times stirring and adding, until a thick slurry has formed. If you can, allow it to infuse for a time, overnight in the fridge, or so. Remove when ready to begin next steps of preparation. Using a bit of the slurry that has hopefully had time to “marinate”, add this to some chopped green olives in a bowl. Sprinkle and stir-in a couple dashes of cinammon — the flavor will really come alive and bloom by opening it up to the addition of the cinammon, just like an Israeli sabra in the desert.

Update: Substitutes can also be used, though, the recipe is really just meant for the Fuji apples. Here, I used pears, and, since it needed a flavor changer/enhancer, I added about a half-jigger or so of Marsala wine. I made this version especially to show to Jyotee, who does not love apples (still, I think it should be apples, but…)

Afterwards, I then turned it into a piecey poached-pear chutney, of sorts, here:

Here it makes a delicious dressing atop plain iceberg lettuce:

and, then, it was love at first bite when I threw-in a garlic-butter-pasta-green herbs side dish, (which had been uninspiringly dry as its plain, old left-over self):

It was wonderful mixed with sliced peaches: 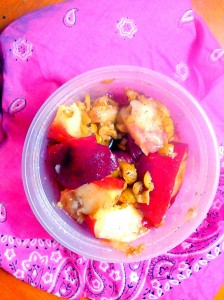